If you were ‘fortunate’ enough to hear the fabled tales of the extraordinary match that the Nigerian Super Eagles lost to India in a ‘heroic’ fashion as a child, then you’d have had an impression that Sam Okwaraji was one of the stars of the show.

The sensational story that travelled far and wide tells how the football turned into heavy stone for Nigerian players to kick and lion for the goalkeeper to catch as a result of the Indian team’s voodoo. Nigeria was whitewashed 99-1, with the only goal coming from Segun Odegbami or Mudashiru Lawal (depending on who you heard the story from).

The aftermath was that the Indian national team got banned for life from participating in football games.

Although that sensational game and all its dramatics never happened, Sam Okwaraji was a star of the beautiful game that shone brightly nonetheless.

Born on May 19, 1964 in Orlu, Imo State, Okwaraji was nothing like his colleagues in terms of refinement. Before he kicked a ball with passion for the Nigerian national team formerly known as Green Eagles, he had studied and earned a master’s degree in international law from the Pontifical Lateran University of Rome. For many of the Nigerian players who didn’t attend school or who dropped out to focus on football, Okwaraji’s educational achievements looked like an impossible feat.

Okwaraji’s father, David and mother, Jane, had only lived together for just nine years after they wedded in Kano in 1950 before David died a war that broke out at the time. The sixth of seven children – five boys and two girls – Okwaraji moved to Enugu with his mother and siblings following his father’s death.

He was a brilliant child and Jane used some of her savings to send him to Italy to study.

“He was so brilliant that making him stay here was going to be a waste of time, so I had to send him,” Jane recalled in a 2014 interview.

It was in Italy that Okwaraji combined football with education.

And unlike most of his colleagues who started their playing careers with local clubs in Nigeria, Okwaraji had had a fairly successful career in Europe before he got his first call to the national team.

In fact, Okwaraji fought tooth and nail to don the green-white-green colours of his fatherland. When ULM’s manager asked the Nigerian Football Association to pay an “estimated cost of $45,000” for Okwaraji’s match bonus and an expected loss in the club’s gate tickets for the period in which Okwaraji would be on national duty, the player stood up against the club, reminding his employers that he understood what his contract stipulated.

“You or the club cannot stop me playing for my country. Let me tell you, I am going to represent my country in the World Cup in Italy whether you like it or not and I would very much like for you to be there,”

John Obakpolor, then newly appointed NFA Chairman, quotes Okwaraji as saying to the club manager. Obakpolor had travelled to negotiate the price to get Okwaraji down to Nigeria to play for the Green Eagles, but the player, who had written several letters to the NFA for a chance, was having none of it.

John Obakpolor, then newly appointed NFA Chairman, quotes Okwaraji as saying to the club manager. Obakpolor had travelled to negotiate the price to get Okwaraji down to Nigeria to play for the Green Eagles, but the player, who had written several letters to the NFA for a chance, was having none of it.

True to Okwaraji’s words, he was in Nigeria in no time. His first game for the Eagles was against Algeria at the Nnamdi Azikiwe Stadium, Enugu on January 30, 1988 in a Seoul 1988 Olympics qualifier. And as expected, he was the star man as Nigeria won 2-0 to qualify 2-1 on aggregate.

And that’s when everything changed. Okwaraji, after only a few games for the national team, had warmed his way into the hearts of millions of football lovers, with his guile and dreadlocks that set him apart on the field. His name was on everyone’s lips. 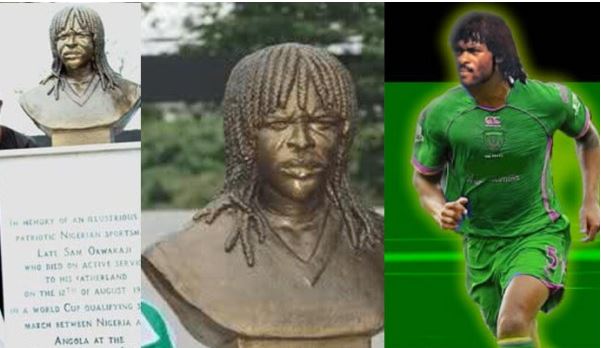 But the joy was cut short less than a year later, when his bright lights were put out abruptly at a young age of 25.

In what would become one of the saddest days in sports in Nigeria, hundreds of thousands of football fans watched agonisingly as Okwarajislumped on the pitch less than fifteen minutes from the end of a 1990 Group C World Cup qualifier against Angola in Surulere, Lagos on August 12, 1989. He never got up. The players from both teams, matchday officials, viewers and even commentators were dumbfounded.

His mother, who was also watching the game when he slumped, wasn’t immediately aware of the tragedy.

“I didn’t know that my son had died. It was a mystery really, because when he was playing, the TV suddenly went blank. And because it was in the evening, I abused NEPA and the people transmitting the game and went to sleep,” Jane recalled. It wasn’t until the following morning that she received the shocking news.

Okwaraji, wearing the jersey number 6, was pronounced dead from possible complications of hypertrophic cardiomyopathy. The autopsy report showed that he had been playing with an enlarged heart and high blood pressure that he nor the Green Eagles’ doctors had somehow not been aware of.

Days before he died, Okwaraji, who was completing his Ph.D thesis, had signed a $450,000 contract with a Belgian club. Nigeria never qualified for the global football competition that year, until five years later when Stephen Keshi led his teammates to USA ‘94 for the first time in World Cup history.

Keshi, himself now late, once said it’s going to be “difficult for the Nigerian public to forget Sam Okwaraji.”

It took Okwaraji only 10 games to be hailed as one of the country’s finest footballers but he was also respected for his rare honesty, dedication and accountability. On numerous occasions, the footballer who spoke Igbo, English, Italian, Spanish, and German fluently, paid with his money to play for Nigeria without asking for a refund. He was indeed not afraid to put his career on line for his country.

Though Okwaraji had life insurance from a Belgian firm, it came with a clause that stated that if he played outside Europe and America, he’d lose the cover. And that was exactly what happened: he died playing for Nigeria. For that particular match during which he died, Guinness Insurance had offered the players an insurance of N10,000 each. And that was all Okwaraji’s family received.

The footballer’s ageing mother and his older brother, Patrick, have both gone on record at different times to lay blame at the feet of the Nigerian government for neglecting their family since his unfortunate passing over 30 years ago.

“Nigerian government forgot all my son sacrificed. That has been my pain. They didn’t do anything to immortalise this boy. He gave his life, money, education and everything for his country,” Janet said regrettably in 2014, condemning a bronze bust erected in his honour at the National Stadium where he died.

In popular culture, Okwaraji has been eulogized by Fuji musician Ayinla Kollington with a song that became hugely popular among Nigerians. He is indeed a national hero.

Now you know what you don’t know about Sam Okwaraji

Do You Think Sam Okwaraji’s Family Should Be Treated Better By The Nigerian Govt??